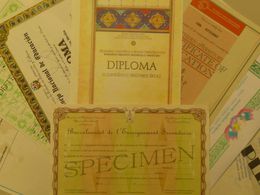 The Central Office for Foreign Education (ZAB) is the central authority for the evaluation of foreign qualifications in Germany. These include school-leaving certificates, vocational qualifications and academic degrees. The ZAB provides services for educational institutions, public authorities and individuals. Each year more than 80000 enquiries are processed.

Depending on the particular purpose, there are a number of different authorities responsible for the recognition of foreign professional qualifications. These authorities may ask the ZAB for expert assessment in individual cases or for general information about a country and its educational system. Information about foreign educational systems is also accessible via the database 'anabin'.

The ZAB issues a Statement of Comparability for Foreign Higher Education Qualifications upon request for holders of an academic degree. This certificate helps employers and employment agencies evaluating foreign higher education qualifications. Especially migrants who would like to work in Germany benefit from this service, as there is no responsible recognition authority for every qualification.

Holders of a foreign vocational qualification corresponding to a two-year German vocational training may apply for a Certificate of Equivalence for Foreign Vocational Qualifications. This certificate allows employers and employment agencies to properly rate the qualification and thus facilitates access to the job market. Certificates of Equivalence are issued by the German Land where employment is sought. Several Länder have entrusted the ZAB with this task.

Both centres joined forces to create a network. NARICs are usually also ENICs in their respective country. The Central Office for Foreign Education (ZAB) is the German NARIC and ENIC.

The centres within this network inform each other about their educational systems and act as contacts in case of problems arising during evaluation of foreign qualifications. They hold conferences and discuss recognition issues that are of interest to all members. Canada, the United States and Australia also contribute to the network.

The ZAB is also involved in the preparation and negotiation of bilateral agreements on mutual recognition of academic qualifications (so-called equivalency agreements).

Foreign recognition authorities can request information about the German educational system from the ZAB in order to facilitate evaluation and recognition of German qualifications. Furthermore, the federal government appointed the ZAB as the national information centre relating to the implementation of the EU Directive on the Recognition of Professional Qualifications by the Federal Government.